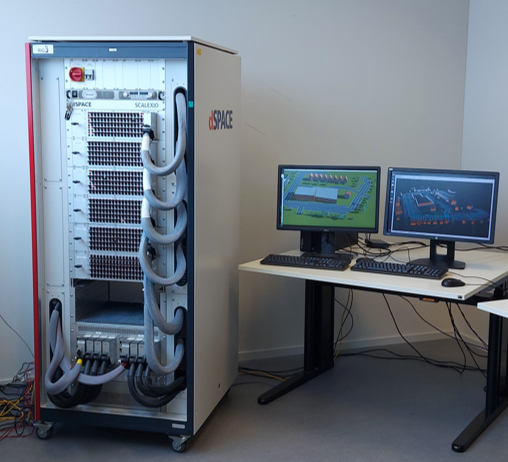 Capgemini Engineering's test center at the Automotive Campus in Helmond has recently acquired Hardware-in-the-Loop (HiL) test equipment. This HiL equipment gives the clients of Capgemini Engineering the possibility to accelerate the development of their complex real-time mechatronic systems, to detect software bugs or hardware problems at an early stage, in order to ultimately simplify the implementation as well.

HiL bridges the gap between software and mechatronics. In vehicles, it is about the functions, which are controlled by the Electric Control Units (ECUs), which in turn control the electronic functions in a vehicle. These can range from controlling hydrogen systems, combustion or electric motors to controlling the cabin temperature, performing the ABS function and adjusting the parameters for the suspension.

With the HiL equipment, different types of mechatronic tests can be performed, such as integration tests, functional and non-functional tests (e.g. performance tests). Testing is performed using test cases, in which a set of input signals and their expected system response are defined. The input signals are generated by a simulation model; converted into physical signals and then sent to the ECU and the mechatronic system. The ECU responds to these signals by changing some variables in the software program. These are measured using the input/output of the HiL machine and the mechatronic system, and finally compared with the expected result.

An example of a system test is validating how different ECUs work together in conjunction with sensors and actuators. For example, an ADAS ECU can control the speed and direction of the vehicle. However, to do that, it needs to work together with a range of other ECUs and mechatronic systems, such as the electric motor, the steering and braking system, and the cluster (Human Machine Interface) ECU. Using the HiL equipment, the integration of these ECUs and mechatronic systems can be tested to verify and validate that they work together as expected.